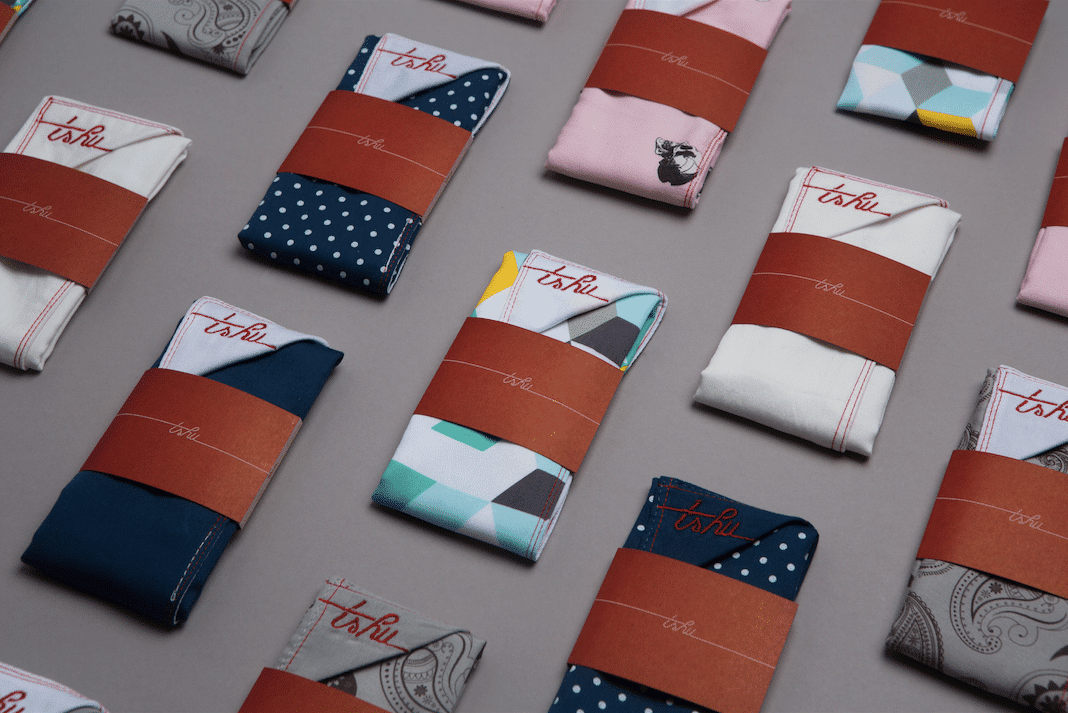 In my first blog post, I mentioned that our project started off with a trip; an idea, and then a dream. First, TSHU was about us. From these first steps were born our first handkerchiefs, which lead to great ambitions. TSHU was us, Marion and I.

Since TSHU’s official launch last spring, several hundred handkerchiefs have been adopted. With great pride, we saw them leave the nest. It seems that not so long ago, they were mere sketches. Now, they are real, they’re part of our and your reality.

We quickly realized that there were as many stories as there are adopted handkerchiefs, and that our hankies had a different impact on everyone. For some, the attraction is comfort, strong values, social responsibility, the environment, for others it’s style, beauty, work or a story to tell.

For him, it’s Gilbert; his men’s handkerchief reminds him of his Father and his childhood spent listening to Gilbert Bécaud’s songs. He now wears Gilbert in his Suit pocket.

For her, Henri is the one – and the reference to the Tour de France’s red spotted jersey inspires her. Every day when she pedals her way down to the office, Henri is there to wipe the sweat off her brow.

And, when life is not so rosy, the comforting, soft Edith is there to dry their tears.

Whether its for elegance or usefulness, it’s a delight for us to see that our handkerchiefs are not only adopted, they are worn, used and they are part of your lives.

All this to say that we suddenly realized that TSHU is in fact, about you! And that’s why we decided to make it our slogan. Because it’s true. TSHU, it’s about you.

Every TSHU handkerchief has a name. Often a reference to the past, a link with our own stories, some inspired from your memories or by you. So, don’t hesitate to send us your ideas, your anecdotes, your dreams!

Stay tuned – in the next months, we will publish a series of blog posts that were born from encounters with TSHU adopters. We’ll discuss the different ways to use the handkerchiefs and share your stories because TSHU, it’s about you.

Thomas Geissmann
Co-Founder TSHU at TSHU
Father, step-father, lover, retired lawyer and entrepreneur—a man of many facets. He is co-founder of TSHU, the company that has put handkerchiefs back on the map. A proponent of good sportsmanship, Thomas loves winning equally as he hates losing. With extensive leadership experience, Thomas has built powerful teams, generated financing rounds of over $10 million and secured important partnerships in three continents.
Latest posts by Thomas Geissmann (see all)
Category: News
Tag: mens handkerchief
Search
Browse by theme
Our latest posts