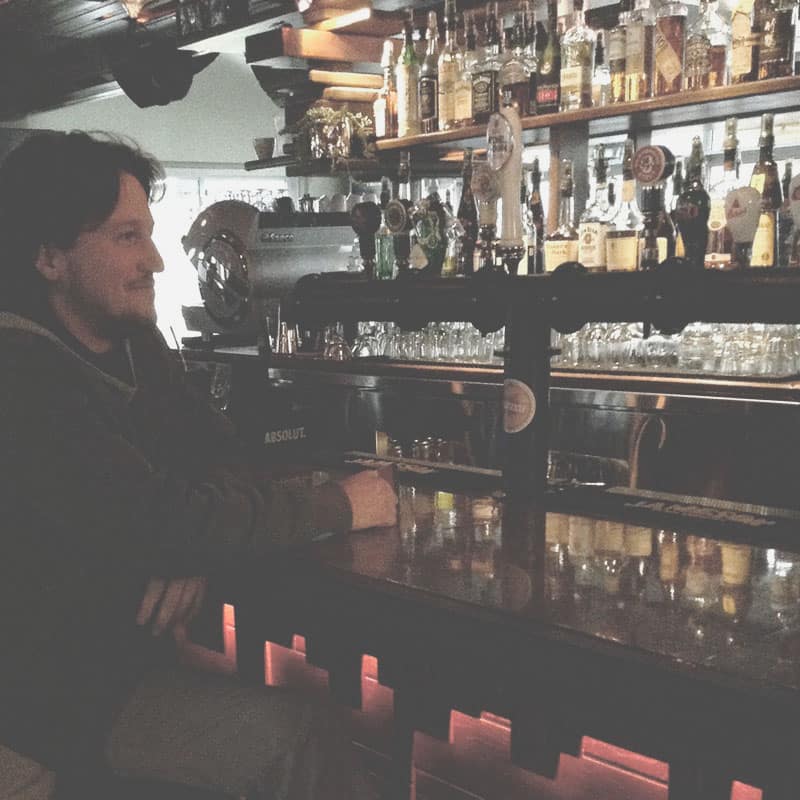 Charles is a builder and bar owner – a tall, strong, and charmingly whimsical fellow.

Dressed in a hoodie and khakis, the strapping man is a sight to behold. But Charles is a gentle giant, you can see the kindness in his eyes. This dichotomy extends to his TSHU Leonard, a pink hanky with skulls all over. Pink and tough.

“I like the contrast between the pink and the skulls – the ‘bad boy with a soft side’ look.” There. He said it.

A sight to behold indeed. Charles certainly leaves an impression.

At night, with the background music livening up the crowd, Charles greets his customers – relaxed, friendly, and attentive. The handkerchief fits him like a glove. He uses it at the bar, when he’s building, and to wipe his hands when he works up a sweat. In the summer, when it’s hot, Charles whips out his TSHU – Dwight or Leo.

When wearing a shirt, he opts for the stylish Leonard. When sporting a T-shirt, Dwight‘s the one peaking out of his jeans pocket. And when it suits him, he places it in his back pocket.

Growing up in Montreal, Charles always saw his father with a hanky, but the latter had a more practical and hygienic use for it. “It would make me laugh. I found it funny. Now he’s the one laughing!” Stylish and handy, Charles’ handkerchiefs garner attention in public. They even draw compliments, to which he responds in kind.

It’s no wonder Charles never fails to leave an impression; he’s a true gentleman – both in behavior and in appearance. A person like you.

Someone true who wears a TSHU.